For the record, today is December 17, 2017, and the issue is still causing me a slight headache.

I went to my daughter’s house to pick up my dogs, and noticed a very large black utility cable hanging down from her neighbor’s house onto the ground.  Keep walking Grace, just keep walking….. but NO! I decide to follow the cable and realize a utility pole in my daughter’s back yard is now at a 60? degree angle instead of the  90 degree angle it should be…. hmmm why didn’t I just keep walking?!?!?  Visions of injured children, “sue- happy” citizens, and a possible fire hazard all flashed through my brain…..FUCK!

I knocked on the neighbors door, no one home.  My daughter wasn’t home (which was why I was picking up the dogs)….. Ok ok, I can call someone,… but who do you call?  I had 32% battery onmy phone, so let’s hope I pick the right place.  Not an actual emergency, so not the police.  I don’t know what kind of line it is…gas, electric, cable, and I’m sure as hell not gonna touch it to find out, so I decide on the Village.  I google the phone number for the village and spoke with a woman named Yvonne.  I explained I was at my daughter’s house and noticed that the pole was falling and that there was some kind of line on the ground and that maybe they wanted to call someone and let them know.  She insisted that I needed to call Com Ed (the electric company) and let them know……

Why did I need to call?  This wasn’t my house.

What if it isn’t an electric line?

Couldn’t they send someone out to investigate?

She responded that Com Ed handled all utility line reports, so I needed to call them.

I called Com Ed, and was disconnected 3 times for pressing the incorrect choices on the automated system ( apparently if you don’t want new service, don’t have a current account number, and don’t want to speak spanish, they don’t want to help you) before I reached a live person.  (Well they were speaking, so I assumed they were alive, but after our call I do question whether there was an actual heartbeat or brain activity there.) I was advised that they would send someone out sometime to check it out.  SOMEONE? SOMETIME?!?!?  Seriously?!?!? Someone could get hurt, or again in this “sue happy” country…SUED.  How about you send someone now? 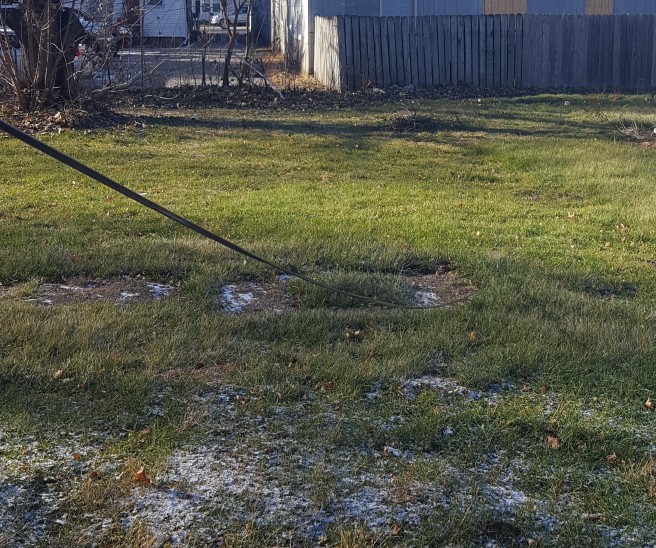 Fine Fine, I will check it out myself!  I went back out to see if I could determine what type of utility line it was.  I followed the line to the neighbor’s house and concluded that it LOOKED like MAYBE it was a phone line???? (I still wasn’t going to touch it)  I had no idea what company handled land line service since I haven’t had one in years, back to google….Yeah my phone didn’t like that……. 19% battery left. UGH!

Now a call to Frontier.  I don’t even remember how many times I was disconnected before getting a live person this time, or how long it took me to explain who I was and why I was calling.  DOES IT REALLY MATTER WHO THE HELL I AM?  I am a good person, trying to do a good thing.  After literally an hour of being transferred from one department to the next, they finally said that they would send someone out.  As they were giving me the reference number my phone turned off.  You have got to be kidding me!!!!!! 0% battery!   SMH…. I closed my eyes, took a deep breath….well I tried.  I think it is more than most people would have done, and have since learned why.

I went to go back into my daughter’s house to get the dogs, only to realize that my keys were locked inside.  It’s winter in Illinois and most of the neighbors have gone south for the season.  Now what?!?!?  It would be kind of pointless to try to walk to call someone since I don’t actually know anyone’s phone numbers, (they are all stored in my currently dead phone). and God forbid I fell on the way.  So I sat and waited.  Waited for my daughter’s boyfriend to get home and let me back in…..

During those 3 hours I repeated….Mind your own business Grace, just keep walking Grace…. but I know that I won’t.  It’s who I am.  I care, I get involved.  Even telling myself that “No Good Deed Goes Unpunished” won’t stop me.  I will still take off my coat for someone that is cold, even if I am freezing.  I will continue taking in stray animals, even though I already own 5.  I have thought that maybe I am a masochist…maybe I am?  Either way I am who I am.

I went home on the 7th feeling that at least I tried.  No one had shown up while I was there.  I WASTED? 4 hours of my life, and it is still not fixed.  The pole is still leaning, the cable is still on the ground, but I tried.  There is a little bright orange traffic cone on the cable where it meets the ground, for all the good it will do.

A fellow blogger reached out to me to say “Hi” today, (I assume because I haven’t been writing lately) and it gave me a push to do a brain dump again.  THANK YOU “you who shall remain nameless at the moment”!!!

I have been trying to work up the courage to do a “live video” of some sort to introduce myself, so I haven’t been writing much while I am learning about Facebook live and youtube.  My goal is to do some sort of “Hi, this is me” video this week.  I have so many questions that I would like to ask fellow bloggers that I follow , maybe you have wondered the same things about me?

So hard when someone says tell me about yourself...what do you want to know? View all posts by msgracefulnot

This site uses Akismet to reduce spam. Learn how your comment data is processed.