Many of you know that Snuff is no longer with us.  I knew it was going to hurt like hell, but I had not counted on the additional pain of watching D.O.G. mourn Snuff.  FUCK!!!!

How do you help an animal grieve the loss of another?

When we got home from the animal hospital that night, D.O.G. was laying on the towel that snuff had been laying on that night.  She wouldn’t move.  She wouldn’t go outside, she wouldn’t eat, and didn’t even want to be cuddled.  Like me, my dogs are wanderers or travelers.  They have beds, bowls, and favorite spots at my house, Einstein’s, and at Thing Two’s.  Even though we don’t always sleep at the same house, the dog’s have never been apart.

The next morning, when I moved my car keys, D.O.G. popped up and ran right to the garage door.  Was she looking for Snuff?  Did she think Snuff was at my house, or did she just want to be home?  Did she know snuff wasn’t coming back?  Did she hurt as bad as I did?  So many questions and emotions.  I decided to take her home.

When we got home, she almost tripped me to get into the house where she immediately went room to room in search of….?  When I let her outside, she went ran the perimeter of my yard as well.  Once she was worn out, she crawled up next to me in bed, and wouldn’t leave my side.  I’m not sure if being there helped D.O.G. or not, but I was not ready to be there without Snuff, so we went back to Einstein’s that night.

Thing two asked if she could pick up D.O.G.  the next night after work.  Her house would be the last place D.O.G. would associate with Snuff, so maybe she could begin to understand Snuff wasn’t coming back.

Have you ever had to help one pet grieve the loss of another?  What things have you found make it easier?  Were there things that didn’t help? I have tried to keep our routine as similar as possible (feeding time, walk time, play time etc)  Until a few days ago, I had not removed Snuff’s dishes or kennel and D.O.G. spent most of her time lying on Snuff’s bed.

To complicate matters, I found a flea on D.O.G.  Are you freaking kidding me?!??!?  I have had dogs, my entire life and have NEVER had to deal with fleas, ticks, mites etc.  So I turned to Google.  Big mistake!  Google had me convinced that we all needed to shave all hair from our bodies and that I had to burn my house down.  ( Ok that was only my initial reaction…but ewwww)

What I HAVE done after telling Einstein and Thing Two, is steam clean my furniture and carpet.  I have bombed (Raid flea fogger) my house 2 times, and washed all bedding and toys in hot water.  (this is the reason I broke down Snuff’s kennel) 😦  I have flea dipped D.O.G. and check her daily but I am overly anxious that it is not enough.  Have you ever had to deal with fleas?  What steps did you have to take to be sure they were gone?

I know I have alot of questions in this post.  I am feeling very overwhelmed at the moment.  I appreciate any suggestions you might be willing to share.

On a final note, Snuff’s ashes have been returned to me.  In addition to putting them in an urn, Einstein put some in a necklace for me and Thing Two and put some aside to be added to the tattoo I got of her paw print on my right leg were she always stood.

I don’t know if you remember, back in March of this year, we received the devastating news that Snuff had Hemangiosarcoma– CANCER.  The vet performed surgery to remove her ruptured spleen, but the cancer had spread too far.  The vet said that we would lose her within the next few months.

While I am grateful that I had 3 more months with her, THEY WEREN’T ENOUGH.!!!!

Snuff took her last breath at 10:30 pm on Saturday. 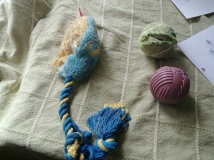 As I looked at this “collection” of the snuff’s things this morning, thinking this is all I have left of her, I realized that I was wrong.  My heart is full of love for her, my brain full of memories.

So now Snuff is gone, but she will NEVER be forgotten!!!!!!! 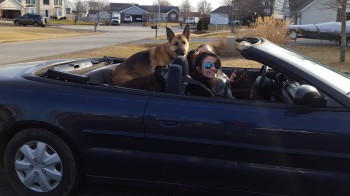 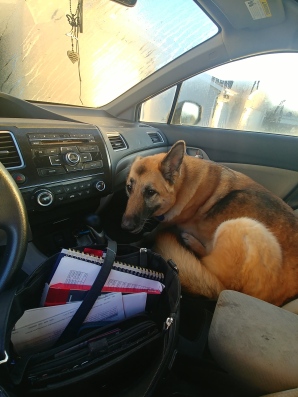 So many road trips together

“Helping” with the yard work 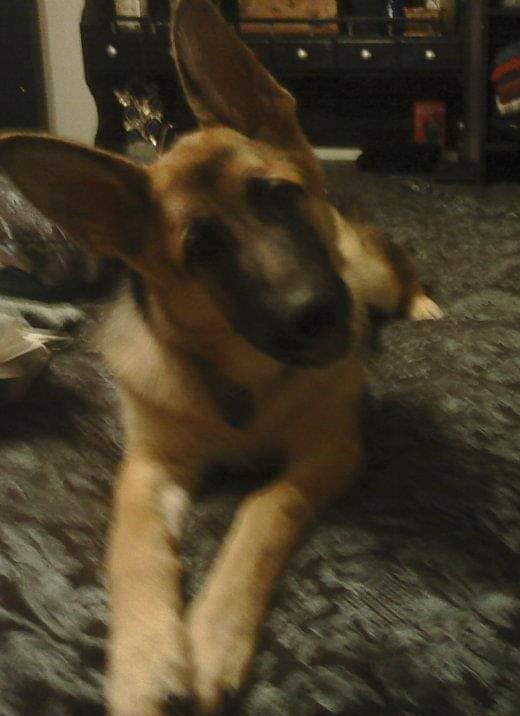 I hope you know that it goes without saying that I would hold onto your forever if I could.  Watching you these last few days, I know the time has come that I have to let you go.  I can’t watch you struggle to rise each time I leave the room.    I feel that you are only holding on to make sure that we are ok.  We aren’t.  It hurts like hell, but worrying about you being pain hurts more.

Though you will no longer be by our sides, you will forever be in our hearts. 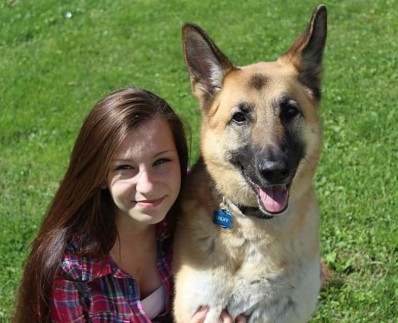 Rest in Peace MY GIRL

If you have followed me for any amount of time, I am sure that you have heard me talk about my GSD, SNUFF.  If you haven’t heard about or met her please take a moment to get to know her while there is still a little bit of time.

When you spend as much time with your animals as I do, you quickly notice any different or unusual personality traits.  Last week, Snuff ‘s ears were down, and when I would get up to leave the room she didn’t sprint up in front of me to see where we were going.  She was eating normally and when I felt her belly and limbs she didn’t cry or pull away but she just didn’t appear to be “up to SNUFF”.

I called the vet and said I needed to bring her in to be examined, for the reasons I mentioned above.  They told me to watch her for a couple of days and see if anything changed.  I made an appointment for Friday.

When Dan got home, I asked him to look at Snuff and see if I was overreacting.  When he lifted her chin to look into her eyes, she collapsed on the floor.

We called the vet back and they said to bring her in immediately.

A series of tests and xrays showed that she was bleeding internally and if we had any hope to save her, she would need emergency surgery.

Several hours  later, the doctor’s reported that there had been a tumor on her spleen that had ruptured, so they performed a splenectomy.  They said that her liver and kidneys looked good, but that we should still send the tumor out for a histopathology to see if it was cancerous.

Over the last week Snuff’s personality has returned. I told myself that the tumor had to be benign and that she would only continue to improve. 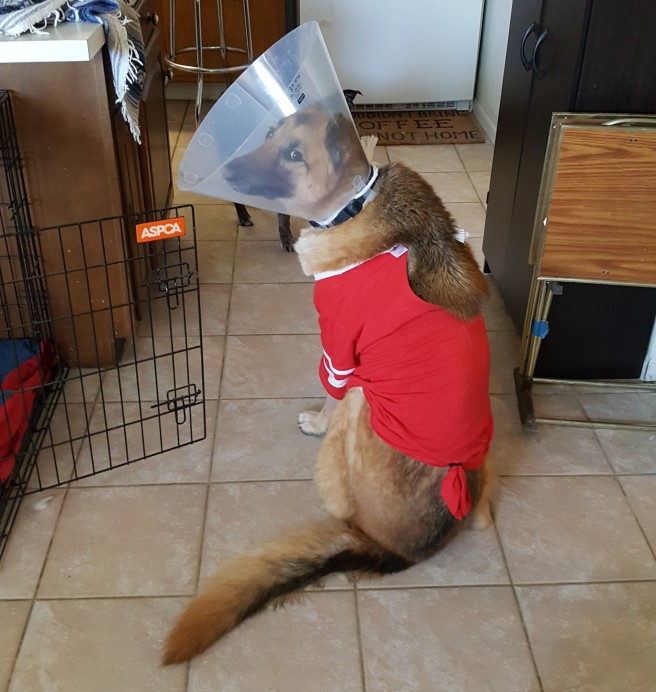 The vet called with the results Thursday and crushed my hopes.  We were no longer calling the tumor a hemangioma, but now it was called Hemangiosarcoma  ….. CANCER.

They have given her 2- 12 months to live stating that the former is more likely as it is a very aggressive cancer.  I am hoping, wishing, and praying or whatever its called that it’s the later.  I am just not ready.  Although I know I never will be.  Snuff is part of the family!

As I try to wrap my head around this news, I am trying to find comfort in the fact that we do still have some time and we have loads and loads of memories.  I am going to share some now. 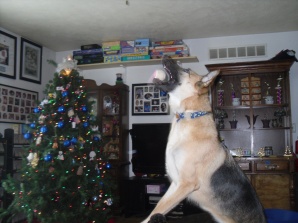 <– This picture is of Snuff and D.O.G. a few weeks after she choose us and we brought her home.

The picture of the right demonstrates he obsession with “balls” and playing fetch.

I will upload a video to youtube later this week of Snuff and her “pet rock” (apparently I don’t have the right subscription to put it here…..smh and another about her making small talk with me.

She didn’t.  She was using her body to keep the other animals away from HER BALL…smh

Speaking of other animals…. Yes I have a few.  Thing 2 was giving them treats to try to  get a “family picture.”  From left to right there is Neewollah (black cat), D.O.G (boston bull dog), Beauty (other black cat and neewollah’s sister), Snuff , and finally Foxy (the White sheep?..I mean cat) of the family.

I think the only think Snuff cares about more than her ball is Thing 2.  They are Best friends.

Thank you for letting me introduce you to SNUFF.  I am sure I will be posting more pictures, stories, and videos in the future.

As shitty as this news has been, I do feel blessed to have a “warning” if you will.

For all of you that consider your pets your family too, is there anything you can recommend to ease the pain it causes you?  Is there anything you do or have done to “keep them close”?  For example, I will be getting a tattoo of her pawprint.  I found a “memory box” picture frame with a place for not only her pictures, but her collar as well.